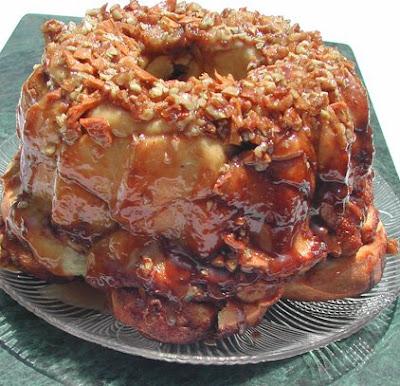 If you're anything like me, you have trouble deciding between a really good cinnamon roll, sticky bun, and monkey bread. So why decide?

Butter up your bundt pan, fill the bottom with sticky bun topping, roll each of your cinnamon rolls in melted butter and stack them in the bundt pan. Let it all rise, bake, and turn out onto a serving plate.

Never bake this if you are alone... the temptation to eat it all while it's still warm can be overwhelming. Trust me, it's really good toasted the next day. You can share it with at least 12 friends and still be satisfied.

The cross section cut makes an interesting presentation. This one was baked in a loaf pan. Let it cool before slicing.
Posted by Nancy Oster at 4:22 PM No comments: Sticky buns are cinnamon rolls with a sticky gooey topping crusted with pecans. I made these last night for my daughter-in-law because she is pregnant and was experiencing low blood sugar. This should do the trick. Oops, that's not what the doctor had in mind?

This is actually the vegan version that I make for a local outlet. Since vegan means no honey, butter, or eggs, these are made with agave, butter substitute, and egg substitute. While I love butter, these are actually quite delicious without real butter... plus I melt a little butter onto the hot bun anyhow before I eat it.

The texture of the bread is light and not too sweet. The filling is deeply cinnamony (I use Saigon cinnamon) but not too sweet. I like it when the filling sticks to the inside of the roll, rather than running out onto the pan. The sweet part is on top. We use some agave in it, which has a lower glycemic index than sugar so you are a little less inclined to jog around the world after eating one.
Posted by Nancy Oster at 6:37 AM No comments:

Okay, here's what happened. Busily trying to figure out how many cinnamon rolls I could make in one day, I strained muscles in both my wrist and palm. I'm not sure if it was from rolling the dough or trying to carry hot full-sized sheet pans across the room with one hand. (You can't really change your mind after you pick up a hot pan.)

So I ended up spending a couple of months having physical therapy to heal the strains and learn that I really need to use both hands to carry a sheet pan and not make twisting motions as I move heavy objects. The repetitive motion part is a little harder to avoid.

In the meantime we have continued to make vegan sticky buns for a local outlet, but I haven't been experimenting with my cinnamon rolls much.

However, I have done some work with adding spelt flour to my dough. Amazing. It gives the dough a lightness that it retains even after they cool and begin to stale.

I've also been comparing rolls baked in a muffin pan to those baked in a hotel pan. The muffin pan makes them look more professional, but the hotel pan rolls are fluffier. I think the fluffy version is especially good as a cinnamon roll.

I'm not sure which is better for large scale production. Guess we'll just have to keep tasting.
Posted by Nancy Oster at 12:13 PM No comments: Since not everyone wants a sweet snack, we decided to work on a savory roll as well. My husband Dave set aside some lean bread dough to experiment. We had some tomato pesto and some spinach artichoke filling left over from some appetizers we'd made.

These are not only delicious as a snack, they also go well with a meal. Last night I made a chicken soup with roasted butternut squash and served the rolls with it.

Several months ago we made pesto twists and also pesto-stuffed rolls. However the stuffed rolls kept blowing open so we had about as many rejects as acceptable rolls. The twists were really good, but a little crunchier than these. So far we like these the best, but we'll see what our customers think.
Posted by Nancy Oster at 6:40 AM No comments: I've been tweaking the dough to try to make as much in one 20-quart mixer batch as possible. Right now I can make 80 to 120 cinnamon rolls (depending on the shape and size) from one batch.
Posted by Nancy Oster at 10:48 AM No comments:

In Search of the Perfect Cinnamon Roll I can pass up a donut, but I can't pass up a good cinnamon roll. For me, cinnamon rolls rank up there with motherhood and apple pie. They seem typically American, but I'm not sure what their origin actually is. Think I'll look that up.

A good cinnamon roll needs to meet certain standards: tender... not dry or hard, not corn syrupy sweet, chock full of cinnamon, not buried in powdered sugar frosting, and not decorated with overlapping lines of piped frosting. The dough should be as pleasing as the filling.

How often do I find one like that? Not very often.

So, I'm making my own. I have a small bakery called the Starlight Bakery. My husband and I bake one day a week for sale to our family, friends, and friends of friends. To get on our mailing list, someone has to tell you about it. Once you're subscribed, you receive an email newsletter on Fridays telling you what we are baking on the following Tuesday. You must order by noon on Monday or take your chances on stopping by and hoping we made more than we sold before you got there. One of our friends actually tried to steal my sister's banana bread, but he settled for some ready-to-bake scones.

In the past six months we've been trying out a lot of breads and pastries. My husband, Dave, bakes the breads and I make the pastries (or the sweeter breads). Our weekly newsletter is read in Texas, Ohio, Oregon, Maryland, and Berlin as well as here in Santa Barbara. Our list is growing rapidly and our order rate is keeping me busy trying to figure out how to get everything ready by pick-up time.

For the New Year, I've decided to focus on cinnamon rolls in various forms and flavors. Join me as I explore and expand my cinnamon roll choices. I'll share my ideas and tell you about what worked and what didn't work along the way... maybe even share some photos (the one shown here is a cranberry apple cinnamon roll).